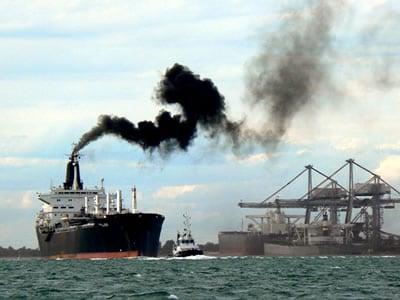 Decarbonisation and the fight against climate change, milestones and priorities in the Valenciaport strategy – May 20, 2021 The supply of electricity to docked ships, the hydrogen supply project (H2Ports), the use of liquified natural gas (LNG), the installation of photovoltaic or wind power plants are some of the milestones that Valenciaport is working on in its 2030 goal, zero emissions, twenty years ahead of
the European Green Deal. Milestones include the tender for the construction management of the electrical substation of the Port of València, changes in the sodium vapor LED lighting fixtures in the València or Sagunto sites, installation of new environmental control cabinets and air quality, the railway infrastructures that are being implemented to promote intermodality and connection between ports and the main corridors. “Valenciaport and its port community began in the 90s with active actions for the environment that is reflected in a work that allowed it to obtain the main European and Spanish certifications such as EMAS. Simultaneously and as a result of the improvement in management, a policy aimed at reducing this footprint is initiated with a series of measures that range from changes in the lighting of Ports to the introduction of electric cars or the incorporation of environmental criteria in the specifications that the APV puts out to tender ”, explains Federico Torres, head of Ecological Transition of the Valencia Port Authority (APV). As a result of this commitment, from 2008 to 2019 the carbon footprint of the Port of València has been reduced by 30%, from 3.19 to 2.23 kg of CO2 per tonne handled. And all this, in collaboration with the port community, which through the Ecoport II project has encouraged the participation of companies in the sector in environmental improvement initiatives. In addition, the companies of the Ecoport II group voluntarily establish annual efficiency objectives in environmental management with a high level of compliance. On the other hand, it is important to highlight the participation of companies in the improvement initiatives promoted by the PAV through R&D projects, such as CORE LNG AS HIVE, H2PORTS, GREEN-C-PORTS, ECCLIPSE, EALING and EALINGWorks. The decarbonization strategy that will be highlighted on June 4 in the webinar organized by the PAV and the Valenciaport Foundation on the occasion of World Environment Day. At the event, representatives of the sector from international organizations such as the European Organization of Maritime Ports and Spanish ports will highlight the strategy of the port sector in the fight against climate change. A global vision of the decarbonization strategy Aurelio Martínez, president of the Valencia Port Authority (APV), and Federico Torres will be in charge of opening the day. The webinar is divided into three sessions. In the first of them, Juan Bautista Sánchez-Peñuela, Minister of Energy of the Permanent Representation of Spain to the European Union, and Isabelle Ryckbost, Secretary General of the European Organization of Maritime Ports (ESPO), will explain the strategies and policies on the matter of decarbonisation that are being carried out from the EU and the main European port areas. Next, Obdulio Serrano, from the State Ports Sustainability Division, Eva Pérez, director of the Promotion of Innovation and Environmental Sustainability of the Valenciaport Foundation, Carlos Botana, head of the Sustainability Department of the Vigo Port Authority, and Rocío López, Head of the Environment Division of the Huelva Port Authority, will analyze the sustainability projects that are being carried out in Spanish ports. Finally, Javier Arenas, director of the Tepsa Valencia terminal, Inés Picazo, head of Environment and Sustainability at the Sagunto regasification plant, and Sven Valentin, general director of the MSC terminal in Valencia, will address the specific case at the terminals . This initiative has great support among the port community, which has been showing its commitment to the environment day by day. Specifically, more than twenty companies and institutions will actively participate in this event: Amarradores Valencia, APM Terminals, Aportem, Baleària, Boluda, Centro Portuario de Empleo, CSP Spain, Docks Logistic, Fertiberia, Galp, Grupo Torres, Infoport, InterSagunto Terminales, MSC Terminal Valencia, Navarro and Boronad, Noatum Terminal, Saggas, Seroil, Tepsa, Naviera Armas, Transmediterránea, Pilots of Valencia, Valencia Terminal Europa and Vareser. Source: Autoridad Portuaria de València (APV – Valenciaport, Port Authority of Valencia)