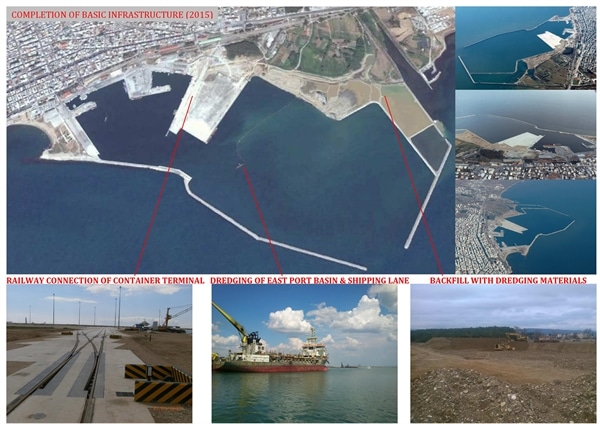 Piraeus, Greece (PortSEurope) August 9, 2019 – The Ministry of Maritime and Island Policy has announced the five “pillars” of its priorities for the maritime industry, including ports. The Ministry’s five key points are: “Seagoing shipping – Our intention is to make the national flag again attractive to Greek shipowners, but also to drastically strengthen the maritime education framework so that we can bring more
young children to the sea and provide them with quality education to pursue a professional career. in an area where our country has great comparative advantages.Ports  – Starting with the flagship and important port of Piraeus, we will be able to quickly launch, in collaboration with private investors, significant investments that will upgrade Piraeus and make it a global competitive port and also a viable port. our port policy so that our ports operate efficiently and safely.Maritime tourism – The tremendous opportunities that are open to maritime tourism in collaboration with the Ministry of Tourism will make Greece a pioneer in maritime tourism and of course make full use of the very important revenue that maritime tourism can bring to our country.Island policy  – 15% of the Greek population lives in islands and we discussed with the leadership of the ministry to explore the possibility of a specific sectoral program for island policy under the new NSRF so that we could finally have a single funding tool for to support the actions to support our islands, and especially small islands that need a special framework of care and support.Safety at sea – It is inconceivable in an island country to have so much choking. In collaboration with civil society and extremely interesting NGO actions, we will make full use of the technology’s potential so that in collaboration, the Ministry, the Port and the private sector can ensure that we can swim in the seas safely.” Regarding port priorities, China’s COSCO, operator of Piraeus Port Authority SA, is expected to resubmit its investment masterplan for the port. Previously, the authorities has refused parts of the plan, which seemed to suggest the plan was at risk. However, the new government is pushing ahead with the master plan for the development of Piraeus port. The €612 million investment was discussed in talks recently between Shipping Minister Ioannis Plakiotakis, deputy PPA CEO Angelos Karakostas, and a representative, Athanasios Liagos, of the Hellenic Republic Asset Development Fund (HRADF/TAIPED), the agency responsible for privatising Greek state-owned assets. The government has already approved a new warehouse, the construction of a five-storey parking space, the purchase of eco buses, the construction of a cruise ship terminal, the revamp of the landmark Pagoda building into a 5-star hotel and conference centre, the conversion of two existing warehouses into 4- and 5-star hotels, a 5-star hotel in the Porto Leone and a museum as part of the Piraeus Cultural Coast project, a PPA initiative. Yet to be approved is a dockyard for luxury, mega-yachts. Regarding the country’s 10 regional ports, the new government will likely review the current legal framework to provide flexibility and value for the regional ports, adding that on the basis of previous studies, the harbours of Alexandroupolis and Kavala in Northern Greece and the ports of Igoumenitsa and Corfu in Western Greece are leading candidates. These ports undoubtedly have a strong role to play, contributing to the upgrading of the country’s infrastructure and, taken together with the rail and road transport complex that has also developed, Greece is becoming a transport and commerce gateway to Europe. The government is also keen to develop the recent privatisation of Thessaloniki port, which it would like to see developed into a hub for trade to and from the Balkan countries. After acquiring 67% of the second largest Greek port of Thessaloniki in March 2018, the consortium of new owners South Europe Gateway Thessaloniki (SEGT) is advancing its investment program, and aiming to build a transport hub linking the Mediterranean with the Balkan countries. Indirectly, both Russia and China have stakes and interests in the port, which has raised concerns in the European Union and the USA, and the port has become the subject of wide geo-political interest. Read more here. Copyright (C) PortSEurope. All Rights Reserved. 2019.