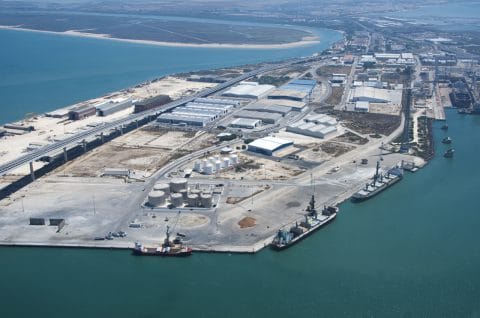 Cádiz, Spain (PortSEurope) January 17, 2022 – The Port of the Bay of Cádiz closed 2021 with 4.94 million tons of general total traffic, growth of 11% compared to 2020, while the Spanish port system average remains at 5.5% (November) and reached a volume of traffic that had not been recorded since the period prior to the economic crisis of 2008. General merchandise stands out
with 2.4 million tons, up 50% compared to 2020, being the port that grows the most in this traffic at a national level only behind from Malaga (until November). Associated with this important growth, container traffic stands out, which for the first time in history exceeds 200,000 TEUs, reaching exactly 214,860 TEUs, practically double that of 2020. As a result, the Cádiz capital dock managed for the first time since 2010 to exceed La Cabezuela-Puerto Real in traffic volume, with 2.38 million tons, compared to the 2.3 million registered in Puerto Real. Regarding the rest of the merchandise, solid and liquid bulk recorded decreases of 9 and 11% respectively, with 1.3 million and 1 million tons respectively. Provisioning, for its part, also grew by 36% compared to 2020, with 101,000 tons, while fresh fishing was down 1% compared to last year, with 14,155 tons, although the sales value grew by 2%, reaching €45 million. Road traffic also shows a decrease of 2 percent with 748,549 tons accumulated throughout the year. Cruise traffic, for its part, accounted for 130 stopovers and 133,362 passengers, which represents a rise of 441 and 227% compared to 2020, after finally resuming this activity last June after the stoppage imposed by the pandemic. Copyright (C) PortSEurope. All Rights Reserved. 2022.