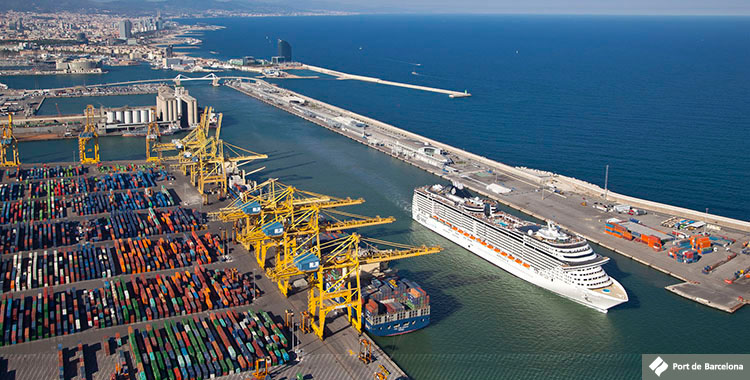 The President of Heraklion Port Authority Mr. Ioannis Vardavas and its CEO Mr. Minas Papadakis visited the Port of Barcelona, one of the leading Ports in Europe and the largest in terms of cruise passenger traffic in Europe/ Mediterranean. During their stay in Barcelona, the top management of HPO attended the 59th General Assembly of MEDCRUISE – November 12, 2021 The technical visit of the
port was, as one could expect, of particular interest. Barcelona Port management presented to Mr. Vardavas and Mr. Papadakis, the port facilities, which cover quite complex activities. It is worth noting that Barcelona, began to develop as cruise destination (homeport & transit), after the 1992 Olympic Games, gaining great growth momentum in the late 2000s. The Port of Barcelona, apart from being one of the most interesting cruise destinations in the Mediterranean (included in all cruise & fly, cruise, stay & fly programs), is of particular importance as a commercial port, attracting a large market share from the growing maritime freight traffic between Europe and Asia, thus being one of the main European-Mediterranean freight hubs and gateway to Southern Europe and the Mediterranean countries. On November 3, 2021, a meeting was held with the President of the Port Mr. Damià Calvet, at the headquarters of the Port. During this meeting, attendees discussed among other topics: the opportunities for cooperation arising from common interests, with emphasis on their contribution at local and national level,the sustainability strategies of both Ports and the improvement of the services and infrastructure of the two Ports. It is worth noting, that the port of Barcelona has already taken many important initiatives, as part of its strategy to address the effects of climate change, having formulated a specific, detailed strategy for the transition to zero emissions. It has large LNG facilities (Barcelona is the only LNG refueling station in the Western Mediterranean for newly built cruise ships operating in the area) and is developing OPS infrastructure. The above points are, as it is known for the Port of Heraklion, key points of its future strategic development, so the leaders of the two ports realized with great satisfaction the existence of common understanding on these very important issues. The common goal of the discussion was to consolidate and maintain the highest levels of quality and efficiency, in terms of the development and evolution of the Cruise sector and collaborations with international business partners from the Cruise industry. The meeting ended with the exchange of ceremonial gifts and wishes between the two Administrations, confirming in the best way that the harmonious relations of the Port Authorities of Barcelona and Heraklion, are committed towards the development of a closer strategic cooperation. Source: Medcruise