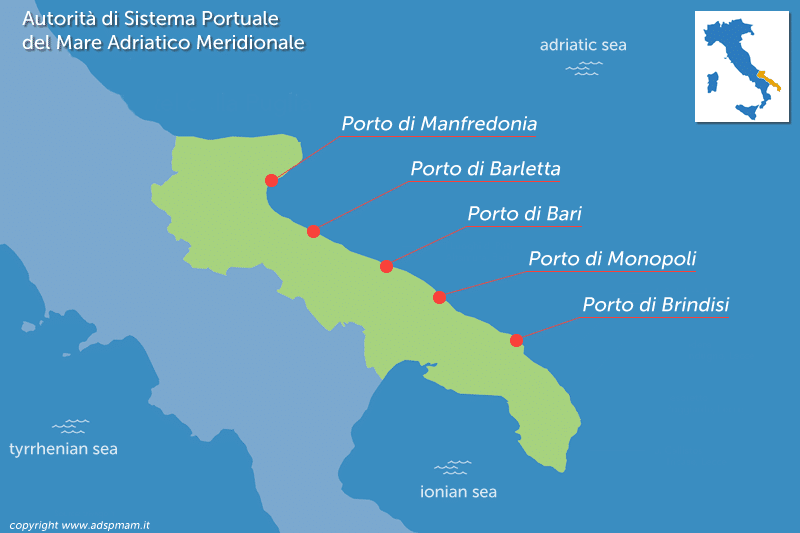 Brindisi, Italy (PortSEurope) September 2, 2018 – The president of Autorita’ di Sistema Portuale del Mare Adriatico Meridionale (AdSP – Southern Adriatic Sea Port Authority) Ugo Patroni Griffi and the president of Autorita’ di Sistema Portuale del Mar Tirreno Centro-Settentrionale (AdSP – Centre-North Tyrrhenian Sea Port Authority), Francesco Maria di Majo, have signed a cooperation agreement, to last two years, aimed at developing the intermodal corridor
Central-Southern Adriatic Tyrrhenian, through the ports of Civitavecchia/Gaeta and Bari/Brindisi, through the promotion of road, rail and logistics links between the central-northern Tyrrhenian Sea and the southern Adriatic. Through the establishment of a permanent working group, synergies and projects will be identified for the improvement, in an eco-sustainable and energy efficiency, of port traffic, especially with reference to accesses in Ro-Ro traffic ports. “With the collaboration of the ports of the Northern Central Tyrrhenian Sea we want to make the transversal intermodal transport more competitive, in particular Ro-Ro, between the Iberian and Balkan peninsulas, especially Greece and then Turkey; also through the digitalization and dematerialisation of processes and the identification of special procedural regimes, respectively within the framework of the Adriatic SEA and the ZLS of Lazio respectively”, chairman Patroni Griffi.” “Through this agreement, the AdSP of the Lazio ports intends to share its experience in the energy and environmental planning of the port system with the AdSP of the Southern Adriatic, jointly promoting programs aimed at making it even more competitive, through the use of alternative fuels for the automotive and maritime transport, the intermodal transport between the ports of Lazio and the Apulian ones. With this Agreement”, said Chairman of Majo, “the role of Port Gateway of Civitavecchia is further increased compared to the transversal intermodal corridors, ensuring the natural extension of the Motorways of the Sea by land and the integration of the latter with the logistic chains not only of the Tyrrhenian and Adriatic side, but also of Spain. “Similarly to the two intermodal corridors Civitavecchia-Ancona (which passes through Umbria) and Civitavecchia-Rome-Ortona/Pescara, the transversal corridor Civitavecchia-Bari/Brindisi, serving in particular Ro-Ro traffic, will contribute”, commented President Majo, “to enhance the role of “land bridge” of central Italy, with clear advantages in economic and employment terms for the ports of the central Tyrrhenian and of the central and southern Adriatic”. Developing the various transversal routes between Civitavecchia/Gaeta and the ports of the central and southern Adriatic, connecting the Iberian peninsula with the Balkans and Greece through intermodal transport in which the maritime component is prevalent, will have undoubted environmental advantages in terms of reduction of harmful emissions in the air, compared to road transport, also decongesting the traffic on the roads and motorways of Liguria and the Po Valley. Source: Autorita’ di Sistema Portuale del Mare Adriatico Meridionale Copyright (C) PortSEurope. All Rights Reserved. 2018.