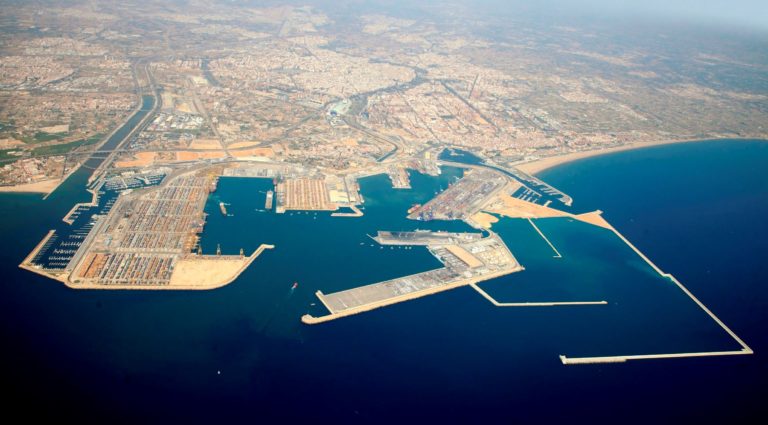 As of January, the Port of València will have a “hydrogenera” or green hydrogen supply station – October 17, 2021 The station will be mobile and will provide the necessary fuel, in the appropriate conditions and quantities to guarantee the continuous work cycles of the equipment that are part of the H2Ports project. The first of these teams will be the Reach Stacker machine or vehicle
prototype or “container stacker” that will be fed with this energy and that will be tested at MSC Terminal Valencia. The second piece of equipment to be serviced by the hydrogenerator will be a 4 × 4 tractor unit equipped with a set of fuel cells for testing in the loading / unloading operations at the Grimaldi Group’s Valencia Terminal Europa. «These are very important machines in the Port of València because they are operating 24 hours a day, 365 days a year and within our objectives and emissions calculations, terminal machinery represents almost 25% of the emissions we want reduce through this type of energy ”explains the head of the Ecological Transition of the APV, Federico Torres. The hydrogen supply station (HRS) is being developed at the National Hydrogen Center, and will include a fixed part that will be dedicated to the reception and storage of hydrogen from an external supplier and the compression of the same until the delivery pressure, and a moving part that will store the compressed hydrogen and will include a hydrogen dispenser for refueling port machinery. The HRS will consist of three main components: a low-pressure hydrogen tank onto which the hydrogen supplier will discharge, a two-stage water-cooled piston hydrogen compressor with heat exchangers integrated into the system, and a mobile unit. high pressure storage and hydrogen supply, Bet on sustainability “It is a clear commitment of the Valencia Port Authority for sustainability, and demonstrates the firm commitment of the (PAV) with the Valenciaport 2030 goal , zero emissions”, according to the president of the PAV, Aurelio Martínez. “At the moment we are coordinating with the National Hydrogen Center the location of this facility in the Port of València. The works will begin from January, so we will once again be pioneers and taking a step forward with this type of infrastructure, in our commitment to sustainability. “It is a project – emphasizes Aurelio Martínez – that is focusing the attention of other port areas, as the President of the Port of Hamburg told us in the meeting we had a few days ago”. The president of the PAV, Aurelio Martínez, already highlighted this week, during the presentation carried out at the Valencia City Council of the “H2VLC Valencia Hydrogen Valley” project that the Valencia port is the first European port to adopt the use of hydrogen in operations port facilities through the H2Ports project, a project we have been working on for several years and which is part of Valenciaport’s commitment to decarbonisation and the fight against climate change. In addition to projects like this with hydrogen, – he said – we have all the environmental certifications, we monitor noise, water or air quality indices or measured since 2008 the carbon footprint, which since then has been reduced by 30% while the traffic has grown 42%. Our commitment is obvious and the results are there ”. The project that will bring hydrogen The European project that will allow València and its port to work and move port machinery with hydrogen is called “H2PORTS – Implementing Fuel Cells and Hydrogen Technologies in Ports”. This is a development that is coordinated by the Valenciaport Foundation in close collaboration with the Port Authority, and is funded by the Fuel Cell and Hydrogen Joint Undertaking (FCH JU) program of the European Union. Its main objective is to test and validate hydrogen technologies on port machinery that allow to have applicable and real solutions without affecting the performance and safety of port operations and producing zero local emissions. The H2Ports project will entail a total investment of 4 million euros and in it participate, in addition to the Valenciaport Foundation and the Valencia Port Authority, the National Hydrogen Center and the private companies MSC Terminal Valencia, Grimaldi Group, Hyster-Yale, Atena Distretto Alta Tecnologia Energia Ambiente, Ballard Power Systems Europa and Enagás. Source: Autoridad Portuaria de València (APV – Valenciaport, Port Authority of Valencia)