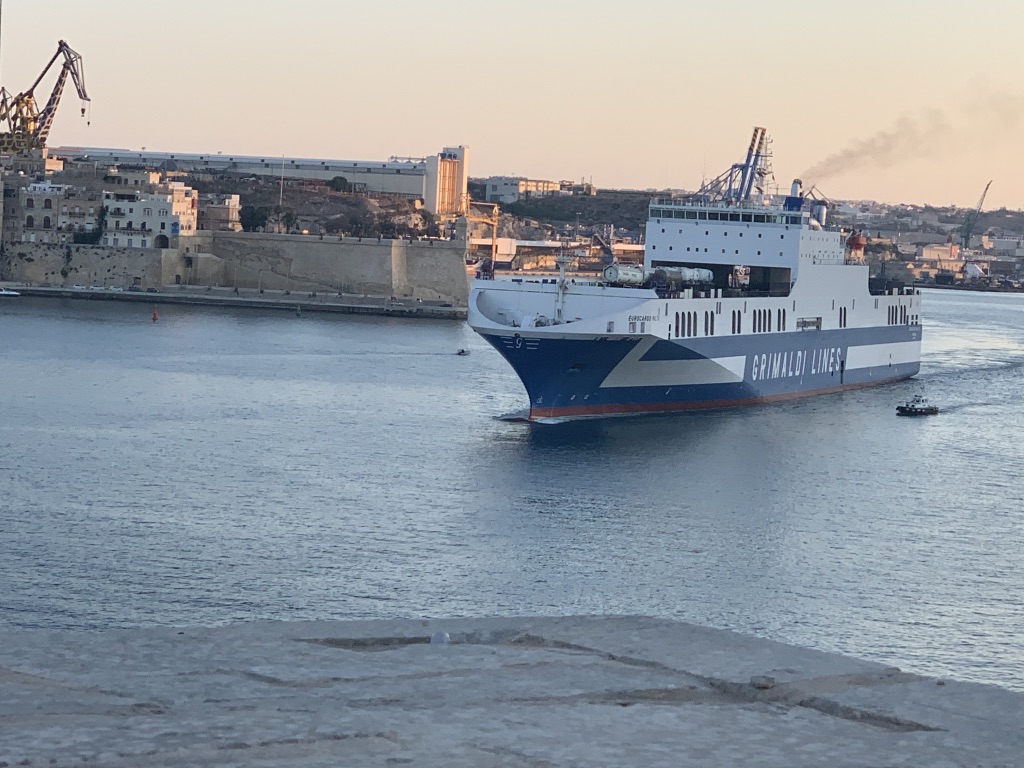 The green ship of the Grimaldi Eco Valencia company, which makes the route between Livorno and València, has been chosen ship of the year at the Ferry Shipping Summit – December 13, 2021 About a year ago, the Grimaldi terminal in the Port of València received the first voyage of the Eco Valencia , one of the first hybrid ships of the Italian company that guarantees zero emissions
in port. A ship that arrived in Valencia on November 19, 2020 on its maiden voyage, and which was received by the president of the Valencia Port Authority (APV), Aurelio Martínez, and the CEO of the Grimaldi Group in Spain, Mario Massarotti. The Eco Valencia belongs to the new Grimaldi Green 5th Generation (GG5G) class, which represents the clear commitment to environmental sustainability of the Italian shipping company. An initiative of new green boats that meets the characteristics of the present and the future of navigation, and that is in line with the Valenciaport 2030 objectives, zero emissions. The Grimaldi company’s Eco Valencia award is an example of the effort being made by the port community that operates in the Port of València with the common responsibility for decarbonisation and the fight against climate change. In fact, the Italian shipping company plans to invest, as announced at its annual convention held in Valencia, 2,600 million euros in new ships and in modernizing part of its current fleet in order to reduce polluting emissions. A commitment that the Valencia Port Authority (APV) reflects in its Valenciaport 2030 strategic objective, zero emissions where all the companies, associations and people that operate in the port areas of València, Sagunto and Gandia participate. In this sense, Valenciaport is collaborating in initiatives such as the use of cleaner fuels such as Liquefied Natural Gas (LNG) in collaboration with the Baleària company; the use of hydrogen in port operations and machinery at the Port of València with the participation of MSC Terminal Valencia or Valencia Terminal Europa of the Grimaldi Group; the active involvement of companies in sustainable R & D & i projects such as CORE LNG AS HIVE, H2PORTS, GREEN-C-PORTS, ECCLIPSE, EALING and EALINGWorks; or the NO PLÀSTIC campaign coordinated by Aportem-Puerto Solidario, are some examples of this commitment of the logistics community to the fight against climate change. In this common objective, progress is also being made in the installation of photovoltaic or wind energy plants, the construction of the electrical substation of the Port of València, changes in the sodium vapor LED lighting fixtures in the València or Sagunto sites, the installation of new cabins for environmental control, or the railway infrastructures that are being implemented to promote intermodality and connection between ports and the main corridors. A common project of the port community with concrete facts in its commitment to Valenciaport 2030, zero emissions. An award that highlights the commitment to decarbonisation Recognition of the Eco Valencia boat of the year award at the Ferry Shipping Summit highlights the work of the port community in reducing polluting emissions and decarbonization. The ship can transport 7,800 linear meters of wheeled goods, which is equivalent to about 500 trailers. The Italian Naval Registry (RINA) has awarded Eco Valencia the “Green Plus” class, the highest level RINA certification in the field of environmental sustainability. The “Green Plus” recognizes the design solutions, on-board systems and operational procedures implemented, both during the construction phase and during the operational phase. All this, with the aim of improving environmental performance beyond the minimum levels required by international regulations. Eco Valencia is the first of the 12 vessels of the GG5G class that the Grimaldi Group has. Source: Autoridad Portuaria de València (APV – Valenciaport, Port Authority of Valencia)