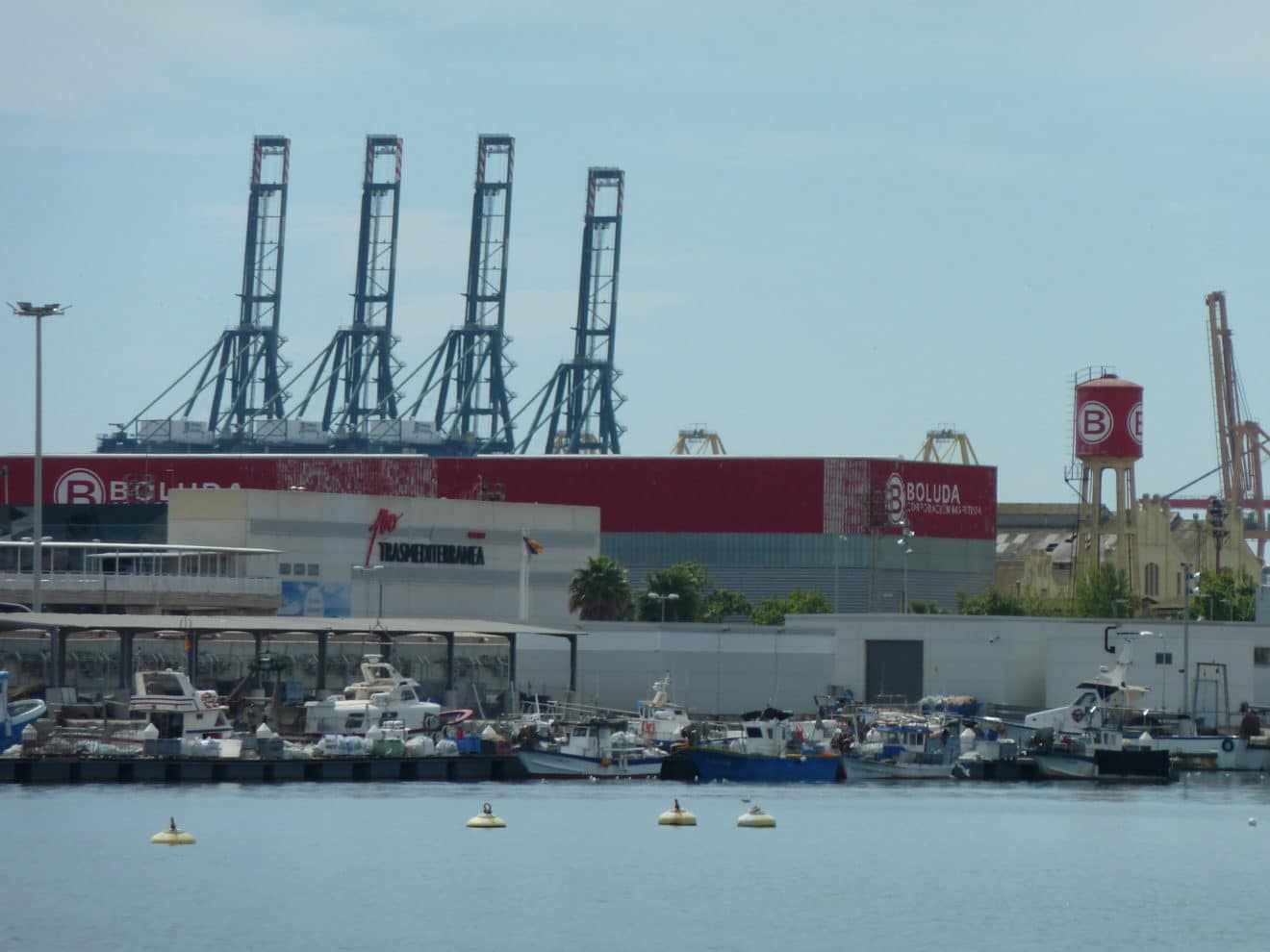 Olya, Russia (PortSEurope) January 18, 2022 – By the end of 2023, the first stage of construction of a new container terminal in Caspian Sea port of Olya will be completed and able to handle 3 million tonnes of goods, Governor of the Astrakhan Region Igor Babushkin told Russian President Vladimir Putin. More importantly he asked Putin to instruct the Ministry of Transport to work
on the deepening of the Volga-Caspian Sea Canal. Babushkin insisted that in order to improve transportation of goods, it is necessary to increase the throughput of the Volga-Caspian Sea Canal, because its current depth does not meet even its officially registered depth of 4.5 meters. Currently, the depth of the canal is about 4 meters and during part of the year the canal is even shallower. Rosmorport, which is part of Rosmorrechflot, is currently dredging the canal, but work must intensify in order to ensure the canal width for two-way traffic and the safe movement of ships, the governor said. Stage two of the container terminal project will see port’s capacity increased to 8 million tonnes by 2030. According to Babushkin, the planned investment in the new container terminal will be 34 billion rubles (€391 million). The project to build a container terminal at Olya port has received official approval in June 2021. The contractor is PLC Caspiy together with Germany-based Martrade Holding. The first phase of the project would develop the current berths 8 and 9 to be followed by four new terminals. The officially released information last year was that this would increase port’s throughput to 2.2 million tonnes by 2023. A second phase of the plans involves the construction of a new port in the nearby Ilmen Zaburunny area (about 7 km from Olya port). The longer-term goal, again according to last year’s official information is a facility with a throughput of 8 million tonnes by 2031 (a year later than the new promise of Babushkin) which would require an investment of 27 billion rubles (€310 million) – 81 million less than the new plan. The project, when finished, is expected to cover an area of 295 hectares and generate at least 800 new jobs. The Eurasian Development Bank (EDB) is considering financing for the Caspian Port and Logistics Company (Caspiy/Caspian PLC) to plan, construct and operate a multi-functional port and logistics complex in Olya, Russian media reported in December 2021. Hamburg Port Consulting (Germany) confirmed the feasibility of construction and estimated the potential freight turnover at 19 million tonnes by 2050. A memorandum for the financing was signed at the Eurasian Congress by Nikolai Podguzov, Chairman of the EDB Management Board, and Stanislav Tsygankov, CEO of Caspian PLC. “Eurasian transport corridors are a priority enshrined in the EDB’s new strategy. Russian ports on the Caspian Sea lack state-of-the-art infrastructure to handle containers, while containerised cargoes account for a significant portion of freight traffic along the International North-South Transport Corridor (INSTC),” said Podguzov. “We estimate the potential for container traffic along the corridor in the range of 325,000 to 662,000 TEU. Linking up the North–South corridor with Eurasian latitudinal corridors would ensure around 40% of container traffic”. In August 2021, PLC Caspiy received from Russia’s Ministry of Economic Development resident status for the port-type special economic zone (SEZ) Lotus in Olya port which is located in the Limansky District of the Astrakhan Region on the bank of Bakhtemir River connecting Volga River with the Caspian Sea. For the modernisation of existing and the construction of new berths Caspiy will rely on help from strategic partner Martrade Holding, a privately-owned German integrated logistics service provider offering worldwide services and with a corporate headquarters in Düsseldorf. The project in Olya is aimed at the development of container shipping on the International Transport Corridor North-South (INSTC) across the Astrakhan Region, linking Northern and Western Europe with India and Iran. The project will create an advanced infrastructure for handling of containerised cargo which is currently absent in the region. Russian and Caspian Sea potential After years of neglect, it seems that since 2020 Moscow is reconsidering the potential of its three Caspian Sea ports and the role they can play in the INSTC, a 7,200-km-long multi-mode network of ship, rail, and road route for moving cargo between India, Iran, Afghanistan, Armenia, Azerbaijan, Russia, Central Asia and Europe. Russia wants a transport hub in the Caspian Sea to challenge developments in other littoral states as it seeks a share of the cargo transit business between Asia and Europe, which is manifested in various international transport corridors which form part of China’s new Silk Road. The Russian government is planning to develop the infrastructure of the country’s only all-year, ice-free port in the Caspian Sea – Makhachkala – and turn it into a transit hub. The target is to attract additional traffic in oil, grain and fish; to improve Dagestan’s crisis-hit economy and give a push to local socio-economic development. It is unclear why Moscow also wants to build a deep-sea port in Kaspiysk, which is only 18 km south of Makhachkala. There might be one more reason for the sudden “discovery” of Makhachkala’s potential. A group of Iranian companies, financed by China, wants to invest in the development of the small southern Russian port of Lagan, a few kilometres from the Caspian Sea, Batu Khasikov, governor of Russia’s Kalmykia Republic, said in March. Lagan is some 200 km north of Makhachkala. Russia has three ports on the Caspian Sea coast: Makhachkala (Mahachkala), Olya (Olia, where a new port is being developed, is just 50 km to the north) and Astrakhan (Astrahan). Makhachkala, Olya and Lagan (if built) need significant investments in order to be turned into modern multimodal transport hubs. They lack developed railway and road connections, modern port-related infrastructure, such as airports and other transport systems. More information about Russia’s Caspian Sea ports: Read PortSEurope analysis Russia “discovers” its strategic Caspian Sea ports. Copyright (C) PortSEurope. All Rights Reserved. 2022.