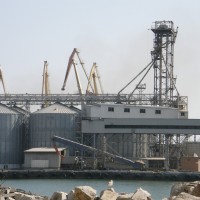 Odessa, Ukraine (PortSEurope) February 28 – Five days after the start of Russian invasion in Ukraine, it seems that the Azov Sea will most likely become a Russian lake under Moscow’s full control. For Ukraine it means losing the two strategic Azov ports of Mariupol and Berdyansk.

The country’s Black Sea ports, especially Odessa and Kherson, are most probably being damaged in the fighting. But now is the time to consider their rebuilding and modernisation after the war when European Union and United States reconstruction funds could start pouring into Ukraine.

EU, U.S., Japan, Canada, Australia and many other countries will help Ukraine when, after whatever length of time, Russia withdraws its forces. Most experts insist that Russia cannot afford to occupy a large country like Ukraine for more than a couple of months.

In our view, in the next few months the world will see a new Marshal plan – this time for Ukraine and donor conferences in Europe and in the United States with pledges for tens of billions of dollars/euros of reconstruction aid.

Even if defeated in the next few days, Ukrainians have already proved that they could fight against the Russian aggressor in a subsequent bloody guerrilla war. And Russian tanks and fighter jets will be close to useless in such a development.

The ruling clique around Russian President Vladimir Putin could win the battle for a land corridor  connecting the 2014 occupied Crimea with Russia. However, it is already clear that they have lost this war, having the entire democratic world united against Russian aggression in Ukraine.

If the Azov Sea ports of Mariupol and Berdyansk are occupied, then any future investment will focus on Ukrainian Black Sea ports – Odessa, Yuzhny, Chornomorsk, Mykolaiv, Olbia (Olvia), Kherson, Bilhorod-Dnistrovsky, Skadovsk. These ports are ideally positioned to benefit from Western investment and potentially from the management of terminals by global operators.

Due to the massive Western sanctions, Russian ports in the Black Sea will lose most of their cargo as the number of Moscow future trading partners dwindle to just a few countries, a process that is going to last years. Russian industry will also suffer.

This is a unique opportunity for the future modernisation of Ukrainian ports. But these ports cannot utilise their potential unless their multimodal connections are also upgraded, and the war-damaged infrastructure is rebuild. Again, this is where the Western donors will focus their investments.

It would be poetic justice to see Russian ports, struggling with Soviet-era dilapidated transport infrastructure and equipment, and their expanded, renovated and prospering Ukrainian counterparts. It is not an exaggeration to say already now that after the war Ukraine will see an investment and construction boom that would allow the country to heal its infrastructure war wounds.

Ukraine, invaded by Russia on February 24, became transport-wise a landlocked country after Russia blocked the Azov Sea, and Ukraine closed all its Black Sea ports for commercial shipping. Ukraine is one of the world’s biggest grain and metals exporter with its corn sold to Europe and China, while its wheat is bought by the Middle East countries, North Africa, Turkey, and many others.

Russia and Ukraine combined supply 29% of global wheat exports, mostly through their Black Sea ports. Ukraine also exports half of the global sunflower oil! It provides some 10% of Europe’s imported steel.

Some 60% of Ukraine’s ferrous metals that are exported by sea go through country’s Black Sea ports of Odessa, Pivdennyi, Mykolayiv (Nikolaev) and Chornomorsk. 20% of the ferrous metals’ exports go via Mariupol.

Ukraine can still use Danube River for water transport towards Europe.

This includes the European Bank for Reconstruction and Development (EBRD) and the International Finance Corporation (IFC). Again, all these plans will be suspended during the war. However, such organisations are well-placed to aid any future development plans as soon as the opportunities arise.

PortSEurope: The latest news about the Ukraine Crisis and its ports

PortSEurope: Further news about the Port of Odessa

PortSEurope: Further news about the Port of Berdyansk