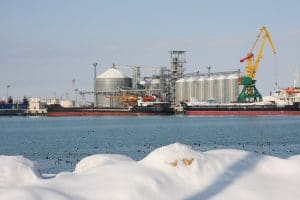 Aktau, Kazakhstan (PortSEurope) April 19, 2022 – As of September the number of ships that operate the Caspian Sea line between the Aktau in Kazakhstan and Baku in Azerbaijan will increase from three to six. This will double the cargo capacity of the Middle Corridor, the Secretary General of the Trans-Caspian International Transport Route (TMTM), Gaidar Abdikerimov, said.

The Trans-Caspian International Transport Route (TITR), also known as the Middle Corridor, is an alternative to the previously used transport route through Russia and Belarus, which were hit by Western sanctions imposed for Russia’s invasion in Ukraine. However, the Caspian Sea is the bottleneck of the Middle Corridor.

Currently, there are three feeder vessels operating regularly between Aktau and Baku, with capacity of 350 TEUs, 125 TEUs and 125 TEUs, or a total of 600 TEUs. A round trip takes up to four days, which means that the three vessels are able to complete five trip per week and to transport some 3,000 TEUs or the TEUs equivalent to 30-40 trains. With the addition of three new container ships in September, this capacity would double to 60-80 trains per week.

For comparison, in 2021, the total shipment volume of the China Railway Express on the main route reached 1.46 million TEUs, or about 27,500 TEUs per week.

The next bottleneck of the Middle Corridor is the Black Sea (via the port of Poti in Georgia) between Azerbaijan and Constanta in Romania, Istanbul (Turkey) or Burgas and Varna in Bulgaria. Constanta is currently overloaded with all the Ukrainian cargo which is rerouted there due to the closure of all Ukrainian ports.

The Kazakhstan government is planning a new container hub for the Port of Aktau. Minister of Industry and Infrastructure Development Kairbek Uskenbaev said that international sanctions against Russia have forced Kazakhstan to seek alternative routes to export, import and transship cargo.

“Negotiations were held with the Singaporean company PSA International on their participation in the implementation of the container hub project. It is expected to attract a container fleet of global container operators such as Maersk, MSC and COSCO Shipping. Expansion of Kazakhstan’s merchant fleet of four ferries is planned with the involvement of private business,” Uskenbaev said.

In 2022, Kazakhstan expects its Caspian Sea ports of Aktau and Kuryk to handle some 10 million tonnes of cargo. The increase on 2021 is due to the redirection of 4 million tonnes of export cargo. Due to ruptured of logistics chains in Kazakhstan, following the Russian invasion in Ukraine a month and a half ago, alternative trade corridors for the transportation of export and transit cargo have been developed.

On February 24, Russia invaded Ukraine, and one of the immediate effects was the closure of all Ukrainian ports in the Caspian and Azov Seas. Traders are redirecting cargo and seeking new routes to market for cargo which previously used these ports. Russia and Belorussia are excluded as transit solutions.

Kazakhstan’s Aktau and Kuryk ports are currently operating at around 25% capacity. The plan is that goods arriving by rail at the ports from Asia can be transported by sea to Baku port in Azerbaijan. From Baku, cargo will be transported by rail to the Georgian ports of Batumi and Poti. Then, sea lines will take goods to Constanta, Romania, or through the Bosporus Strait to Mediterranean Sea ports. From these ports, cargo rail services will bring goods to markets in Europe.

Export cargoes are redirected to Latvian ports (Liepaja, Riga, Ventspils) and to the TITR ports, which combines the countries participating in the new Silk Road project and important players in the region. Its members are leading maritime and transport companies from Kazakhstan, Azerbaijan, Georgia, Ukraine, China and Turkey.

The organisation aims to popularise the Middle Corridor, accelerate and simplify transport procedures between Asia and Europe, and make special preferential tariffs. Between East and West, in terms of cargo, the Middle Corridor helps to compete with the north-south routes.

TITR allows European companies to bypass Russia, which until now sanctions the transit of certain types of goods through the country. A number of Russian entities are under sanctions from the international community following Russia’s annexation of the Crimea in 2014. The sanctions have been massively increased since the February 24 invasion of Ukraine by Russia. The importance of this route was underlined with the inclusion of Georgia and Azerbaijan in the European Union (EU) TEN-T network.

The route passes through the seaports of Aktau and Kuryk, then along the feeder and ferry line to the Azeri ports of Baku and Alyat. Then, along the railways of Azerbaijan and Georgia to the Georgian Black Sea ports of Batumi and Poti. Further, via the Baku-Tbilisi-Kars railway to the Turkish ports of Istanbul and Mersin or alternatively across the Black Sea to Constanta in Romania or Bulgaria’s ports of Varna and Burgas.

“As an alternative land route for the delivery of goods to Europe, we propose to use the capacities of the Kazakh seaports of Aktau and Kuryk, bypassing the ports on the Black Sea, then to Azerbaijan, Georgia, Turkey, Bulgaria, Hungary and further to Western European countries,” said in early March Yerlan Absatov, Kazakh transport union (KAZLOGISTICS) director. Such a route is longer and more expensive, but safer, he added.

In the light of recent events in Ukraine, the Port of Kuryk can increase its cargo transshipment five folds or additional additional 4 million tonnes, Serik Akhmetov, General Director of Port of Kuryk said.

Oil products, fertilizers, chemicals, metals, and consumer goods are exported from Kazakhstan through the port of Kuryk. Imports are food, industrial equipment, textiles, electronics, building materials and other goods.

On February 24, Russia invaded Ukraine. U.S. and EU sanctions practically closed Russian ports for international cargo and ships. The war also closed all Ukrainian ports in the Caspian and Azov Seas. Traders are redirecting cargo and seeking new routes to market for cargo which previously used these ports. Russian road and railway transport have also been affected

TITR allows European companies to bypass Russia, which also sanctioned the transit of certain types of goods through the country. Now Russia is completely isolated from the international trade.

The importance of this route was underlined with the inclusion of Georgia and Azerbaijan in the European Union (EU) TEN-T network.

Two feeder vessels started regular sailing between the Turkmen port of Turkmenbashi and the Azerbaijani port of Baku from the beginning of 2022. In 2021, there was only one feeder, according to Türkmenistanyň Ulag Logistika Merkezi (TULM). This is a timely doubling of route capacity handling containers that cannot use Russian ports due to the sanctions against Russia for its invasion in Ukraine.

Container ships Shair Sabir and Mahmoud Ragimov, operated by Ady Container and TULM, will transport containers on the Baku-Turkmenbashi-Baku line. This will increase cargo capacity of the second China-Europe route through the Caspian Sea.

All this will support the development of the Asia Pacific region transport route of China-Kyrgyzstan-Uzbekistan-Turkmenistan-Azerbaijan-Georgia-Turkey-Europe. The transcontinental multimodal railway route was established in 2019 with the participation of Azerbaijan Railways and state railways of the respective countries. In December 2021, Turkey joined the route.

Currently, container loads are transported to and from Turkey on the Baku-Tbilisi-Kars railway, as well as from Georgian Poti and Batumi ports to Uzbekistan, Turkmenistan, Kyrgyzstan and in the opposite direction.

The volume of freight on the route in 2021 increased by 101% compared with 2020. Cargo shipments are carried out by the Turkish company Pasifik Eurasia Logistics, the Georgian firm GR Logistics and Terminals, Azerbaijani companies Ady Container and TULM, UzbekTemiriyolExpedition and the operator of the Kyrgyz Railways.

The best result on the route was reached in May 2021 – the containers were delivered from the Turkish city of Izmir to Osh (Kyrgyzstan) in 18 days. The target of the operators is to reduce transit time in this direction to 12 days.

More PortEurope news about the Port of Baku