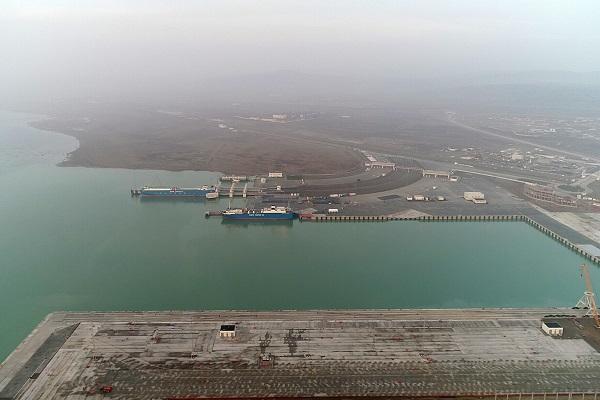 News Release – Director General of Baku Port Taleh Ziyadov took part in an online meeting on “Prospects for Regional Development and Cooperation” at the University of Cambridge Central Asia Forum – February 10, 2021 On February 10, Director General of Baku Port Taleh Ziyadov held an online meeting with about 100 local and foreign experts and representatives of academic circles on “Regional Development and
Cooperation Prospects” at the Central Asian Forum of the University of Cambridge. During the meeting, the Director General first said that after the victory of Azerbaijan, which won the 44-day war under the leadership of President Ilham Aliyev, new opportunities have emerged in the South Caucasus, which in turn will contribute to the development of transport.  Ziyadov further noted that during the Soviet era, up to 3 million tons of cargo a year was exported and imported from Iran and the Middle East from the Julfa transport hub. One of the important points in the ceasefire declaration signed in Moscow on November 11 was the restoration of the transport corridor between Turkey, Armenia and Azerbaijan. This, in turn, will increase the number of transport corridors in the region and, accordingly, increase the interest of global transport and logistics companies in the South Caucasus region. It is no coincidence that freight traffic between Asia and Europe via the Baku Port is constantly growing. It was noted that Turkey’s third export train arrived in Baku Port on February 6. The convoy carrying medical and chemical products was loaded on a ship in Baku Port for 6 hours and sent to Aktau port. The final destination of the cargo is China. On the same day, a ship carrying cargo from China to Turkey and Istanbul and carrying 36 containers of industrial equipment (compressors) was overturned in Baku Port. Another noteworthy point is that on February 9, 4,000 Turkish-made household appliances were delivered to Russia via the Qatar-Baku-Tbilisi-Kars railway and the North-South Transport Corridor. These innovations also prove that the Caspian Basin region is a huge potential consumer market. Around Baku, within a radius of 1,000 kilometers, 130 million people live and is one of the ideal places in the world to create a regional transport and logistics hub. The Director General stressed that the Baku Port, which is located in the center of important transport hubs under the “One Belt, One Road” project implemented by the Chinese government, is important for this project and can play the role of a port hub for access to the region. It was brought to the attention of the audience that 2020 was a very successful year for Baku Port, and this year the port’s cargo turnover increased by 20%. It was noted that the share of transit cargo was 87% of the total cargo handling, and thus compared to the last 5 years, there was a 5-fold increase in the volume of large vehicles (TIR), 3 times in containers and 3.5 times in dry cargo terminals. . It was brought to the attention of the online audience that in 2019, Baku Port was also awarded the Green Sea Port Certificate by the European Sea Ports Organization (ESPO) for the first time among Caspian ports and in both port operations and environmental protection. “Green philosophy” is in the spotlight.   It also implements the project “Promotion of green ports and connectivity in the Caspian region” together with the Port of Baku and the Organization for Security and Cooperation in Europe (OSCE). The project, which will connect the ports of Baku, Aktau and Turkmenbashi with the OSCE, was another important step in terms of protecting the environment and accelerating port operations in the Caspian region. The project envisages the preparation of a roadmap for the automation and digitalization of 3 ports, the preparation of an appropriate feasibility study to explore the possibility of using renewable energy. Source: Port of Baku